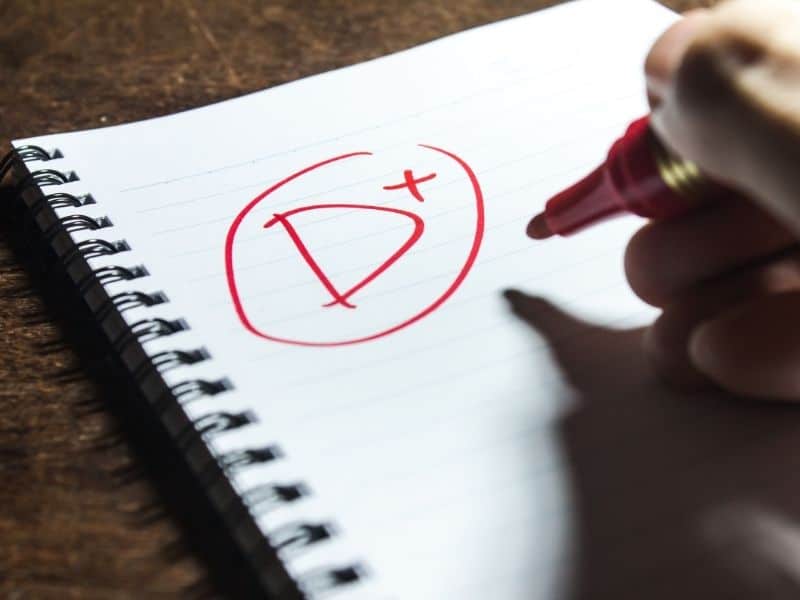 He said that Notre Dame requires you to submit your second/last semester transcript from senior year, and if your grades drop drastically, admissions officers can rescind your acceptance.

What does it even mean to get your admissions revoked?

To get your admissions revoked means that a college declares your acceptance into their school as invalid. There is a multitude of reasons for this as to why you can get an admission revoked, but the most common reason would be a drop in your grades.

Let me write out a common scenario.

A student has excelled in school all their life. By the time college applications roll around, they have a 3.94 (out of 4.0) unweighted GPA and a 4.66 (out of 5.0) weighted GPA.

From this, you can conclude that they got almost all A’s throughout high school and took challenging classes such as APs/IBs and honors.

They submit their college applications, and many months later, they hear that they have gotten into their dream school: UChicago (you can replace UChicago with any school, I’m just using it as an example). This is such exciting news!

However, for the last semester of their senior year, this student has let senioritis kick in. Now, what once was straight A’s has become straight C’s and D’s. Upon admitting this student into their school, UChicago asks for the second-semester high school transcript.

The student submits his or her second-semester transcript, which is full of C’s and D’s. Shortly after, this student gets an email saying that their admission has been revoked from UChicago, the reason being their drastic drop in grades.

So, how bad do my grades need to be to get revoked?

Your grades have to drop very noticeably for a college to revoke your admissions. Let’s use the example I wrote above.

If you submit an unweighted GPA of 3.94 (out of 4.0) and a weighted GPA of 4.66 (out of 5.0), that indicates that you have had almost all A’s and have been taking challenging courses throughout high school.

If you get straight B’s second-semester, that’s not going to raise too many alarms in the eyes of an admissions officer. However, if your grades plummet to C’s, D’s, and E’s, that would raise huge alarms, especially since you have been a top student throughout high school.

In the eyes of an admissions officer (or, for that matter, in the eyes of anybody), it seems like you decided that the hard work is done and completely let yourself go.

Very recently, I interviewed Kate, who just graduated from Duke University. When we started talking about her senior year of high school, she mentioned how she and practically everyone else at her school eased off on their senior year.

I asked her if she ever worried about getting her admissions revoked. She said that she didn’t have much of a worry about a revoked acceptance because she said that as long as you meet a certain threshold for a college senior year, then you will be fine (the threshold she had to meet was a 3.0 GPA).

Again, a slight decrease in grades is not going to provoke every college to revoke your acceptance. Now, a decrease of many letter grades probably will.

How often do colleges revoke an admission?

Fortunately, a revoked admission is not something that happens to most students if they get accepted into a school.

It’s possible, and most colleges have probably revoked an acceptance sometime during their existence, but it’s not as if each college releases hundreds of emails revoking students each year.

Is there anything I can do if my admission is revoked?

Yes, there is something you can do if your acceptance is revoked. Usually, a student will get an email informing them of their revoked acceptance; sometimes, the college will allow a student a certain amount of time to explain their actions.

As soon as you get said email, call the school immediately. This is not a guarantee that you will get your admissions back or even have a chance to explain yourself but try to put in as much effort as possible to win back the college.

Does having my admission revoked from one college affect my chances at other colleges?

To be honest, I don’t know if a college is going to call other colleges and tell them that they revoked your acceptance. I tried to call some colleges to ask them this, but none picked up, which I totally understand.

However, let me say this: most colleges require your second-semester transcript, so if there is a dramatic drop in grades, all the colleges you applied to will see and come to their own decision.

But, for another article I wrote about rejecting an ED offer, I did call some colleges to get a direct answer. One of the colleges I called was Duke, and the lady who answered the phone told me that Duke has the right to call and tell other colleges if they revoked your acceptance.

You may think that this is a bit too much, but it is within the college’s power to do this, so don’t take your chances.

What are other reasons my admission could be revoked?

First and foremost, a college isn’t going to revoke your admissions because they feel like it; there will be some sort of reason behind it. There are really two other major reasons why a college would revoke an application:

There are quite a lot of things that can fall under this category. Such things include, but are not limited to, the use of drugs (includes alcohol), any arrests, suspensions, and violence. Drugs (and alcohol) and violence are pretty self-explanatory; arrests can be for anything that breaks the law.

Another thing I’d be wary of is social media. Social media can be fun and a way to show off to other people, but be very cautious of what you post on there.

Have you heard those stories of people getting fired from their job after their boss found inappropriate things on their social media? Yep, they apply in the college world as well.

In an article published by The Harvard Crimson, at least ten students from the prospective class of ’21 had their admissions revoked after the school found out about some inappropriate meme chat.

In this chat, “students sent each other memes and other images mocking sexual assault, the Holocaust, and the deaths of children… [and] joked that abusing children was sexually arousing, while others had punchlines directed at specific ethnic or racial groups.”

You can use social media and chat all you want with your friends, but post about the ice-cream shop you went to or your Christmas tree that has been set up in your house, not something stupid to look cool in front of others.

Some schools allow self-reported test scores, but they require you to report your official scores provided by the College Board if you are admitted. However, with other parts of your application, such as extracurricular activities, it is easier to falsify that sort of information.

A college will either really analyze your letters of recommendation and/or call your school if something about your extracurriculars seems fishy, but other than that, many schools don’t fact check stuff like that.

I remember watching a former Stanford admissions officer’s video reviewing a few case-studies of students’ applications. With one of the case studies, she said that the fact that the applicant had so many leadership positions in many clubs raised alarms and that she may have to look into that, going as far as to call the school.

Again, don’t be stupid and write down a stat or accomplishment that doesn’t belong to you, because if you do and the school finds out, there is a very likely chance that your acceptance could be revoked.

Lying About Acceptance To Other College(s)

Ok, I lied. There is one more main reason that a college could revoke your acceptance; that would be rejecting an early decision offer. I won’t elaborate too much on this because I wrote an entire article about it here, but I will say this.

Applying ED to a college means that you are entering into a binding agreement. If you get into this college under ED and decide to break said agreement, you stand a chance of getting your acceptance to other colleges revoked as well.

As I said, I won’t elaborate too much on this matter, so check out my article to learn more.

My humble suggestion would be to push through your last semester of high school and continue on with relatively the same grades as you’ve achieved before.

You can roll your eyes and complain about how annoying that is, but it’s better to put in a little bit more work than have all your previous work be for nothing by getting your admissions revoked.