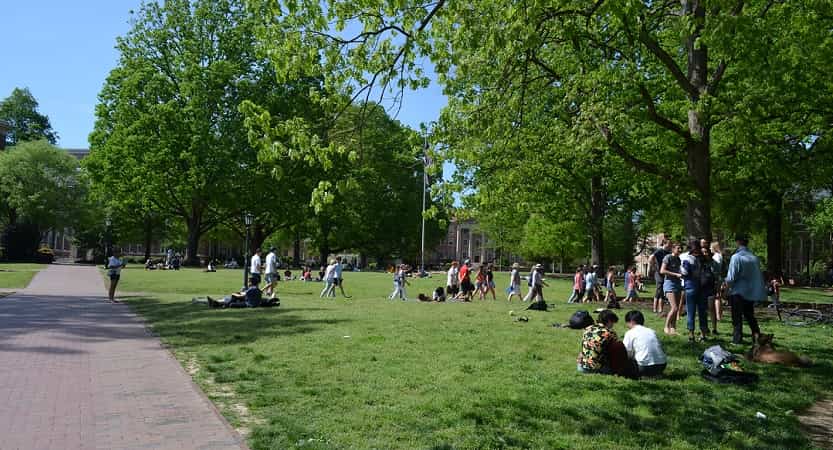 After we had a delicious Indian lunch at Duke, we took a quick 20-minute drive to UNC at Chapel Hill. The parking situation was insane. We had arrived at least 30 minutes earlier than the start of the tour, but we had to walk about a ½ mile to get to the building.

If you do go to UNC at Chapel Hill for your own tour, I recommend you park in the garage because it is connected to the building where the session was held and the street parking around the campus is reserved for the staff.

After we had entered the room and taken a seat, a sort of presentation was playing. The presentation included video clips of students saying why they loved UNC. I particularly remember a former UNC student mentioning how he felt that he could freely express himself as a dancer.

He loved showing incoming freshman the different ways you can communicate emotion through dance. He believed that UNC gave him the opportunity to pursue what he has dreamt of.

In fact, 60% of UNC undergraduates do original research and ⅓ study abroad. They also looked specifically at what you could bring to the community. Since NC residents are paying the university, only 18% of the students can be out-of-state.

What does UNC look for in your application?

As I mentioned before, UNC looks for what you can bring to UNC, and they are absolutely willing to help you max out your full potential. For example, a student studying journalism went to Rio to cover the Olympics. The Olympics!

Just imagine your teacher coming up to you and casually saying, “You’re a really good journalist and have amazing potential, why don’t you test your skills out at the Olympics?”.

Another UNC student who really took it to the top was a girl named Rachel from Newton NC. Rachel came to UNC unsure of what she wanted to major in. She started with the intention of pursuing a medical career and changed her major 6 times until she came back to the medical field.

Rachel had volunteered at a hospital and helped patients with disabilities, including blind people. She was in biology class when she and her peers were saying how the illustrations in the book helped them a lot when it came to understanding body parts.

Rachel, along with two of her classmates, one of who helped blind people run marathons on the weekends, wondered how blind people learn about the inside of the human body.

They all shared deep care for helping the disabled and decided to do something for the blind. They started a non-profit to 3D print body organs to give blind people the opportunity to learn about the human body.

What is required in your UNC application?

UNC only has the common application as an option, but our admissions officer told us that Coalition is coming soon. One thing I thought was unusual because UNC is a very highly ranked school, is that they do not require your class ranking or your GPA.

In addition, when they are reviewing the application, they do not cross out people with a low SAT or ACT and they allow superscore. This furthermore proves that UNC wants to know who you are behind the grades and numbers.

Despite this though, the average UNC student took 5-14 AP courses in high school and approximately 85% of the students have great academics. Now listen closely: Our admissions officer said that you need to throw all of the life lessons your parents taught you out the window when writing your UNC application.

I come 30 minutes early to practice to help the coach set up and stay behind 1 hour to help clean up. Since I have been made captain, we have had this many wins in one season.” If you were an admissions officer, which would you pick? The second option? I thought so.

A big tower named “Morehead Patterson Bell Tower” is lit up at the beginning of the year and UNC students stand around and sing the college song. And that’s where we started our tour.

After introducing herself, our tour guide dove into the topics of dorms and roommates. All freshmen live mainly in South Campus (I have no idea what that means regarding your class locations).

You have 2 options for a dorm room: 8 person suite or a hall, but everybody shares a common bathroom. Before you come to UNC, you fill out a survey asking questions about pet peeves, cleanliness, etc…, but you are not able to pick or request roommates.

All dorm buildings have one dining room and one kitchen per floor and each floor is has either all boys or all girls. Our tour guide said that their UNC provides a lot of accommodations which you should request in advance if you are able to.

For example, if you need a pan to cook dinner on February 15th, you should probably reserve in advanced. She also mentioned how she is able to do work-study this way, so if you need a pan, then she is the person you come to.

Next, we took a walk to “The Pit”. No, it is not some deep, long passage like the one which led to the “Chamber of Secrets” in Harry Potter. It is approximately 30 x 40 foot rectangle that is 2 feet deep, very disappointing.

When we stopped by it, there was some sort of construction project happening that involved actual students doing the building which I thought was another example of how UNC students get involved in the community.

Though there is nothing special about The Pit itself, it is the center of the college with many surrounding buildings that students use every day. There is a type of convenience building that has printing stations and IT people to help fix electronics.

Our tour guide had actually spilled something all over her laptop during the week, which of course was finals week, and she left it to the IT people and within a few hours, it was as if nothing had happened to the laptop.

There are also 8 story libraries which surround The Pit. Our tour guide jokingly said the higher you climb up the library, the quieter it gets and she has never gotten even near the top. Needless to say, everybody passes through The Pit at least once a day.

She also mentioned that there are 800+ organizations that take place on the UNC campus. Now, 800+ seems like a lot, and it is, but she said her friend made a bacon club where you meet monthly and cook something with bacon.

Then, we took another short walk to a building where we were able to go inside one of the average classrooms you will find at UNC. While we were walking, I took note that many students like to sit on the lawn and work. There were a few patches of green grass left.

I am joking, but the students seemed to prefer working outside in the noise than the quiet, air-conditioned libraries. Anyways, the average classroom we saw fits 20-30 people.

This makes sense because 7% of the classrooms have 100 or more students so professors are able to have a one-on-one with students and discussions rather than 2-hour lectures.

Our last stop was the old & famous Well. The Well is a place that has been standing for over a hundred years (Look at a picture of the original The Well) and UNC students line the street to drink from it every year because it apparently brings good luck.

It is newly remodeled and is the logo of UNC at Chapel Hill. Our tour guide went on to tell us that Duke University and UNC have a basketball rival. No matter what time it is or what you’re doing, whichever team wins runs out immediately to Franklin Street and sing the schools song.

While she told us this, there were some girls taking their graduation pictures at the Well and the beautiful flowers that surround it.

She wrapped up the tour by saying that in the field behind the Well, there was a tree named the Davie Poplar Tree and as so long as it stands UNC will prosper, so they planted one in every county and two additional trees on either side of the original.

What is UNC’s acceptance rate?

What is UNC’s decision date?

What is UNC’s Mascot & School colors?

What is UNC’s graduation rate?

Is UNC an Ivy League?

Is UNC private or public?

No, in fact, it is the 8th most liberal school in North Carolina

What is the ethnic diversity of UNC?

What is the percentage of women and men enrolled?

How many people are enrolled in UNC?

What is UNC’s acceptance rate of waitlisted students?

Yes, but the needed score for an exam depends on the exam taken

There have been over 900 reported safety-related crimes of campus in 2017 Chapel Hill itself has its good and bad neighborhoods, but overall its crime rate is lower than North Carolina’s & The united States.

What are UNC’s grade requirements?

UNC doesn’t have a minimum SAT/ACT or GPA but the averages are:

Is UNC a liberal arts school?

What are some famous UNC alumni?

link to What Are The Best Schools For C Students? Read Before Apply

If your average grade throughout all of highschool was a C, then your GPA is something along the lines of 2.2. The national average usually ranges between 2.8 and 3.0, so having a GPA of 2.2 is...

Continue Reading
link to What Are The Best Non-Ivy League Schools Along The East Coast?

As you may or may not know, the east coast is home to all the Ivy League schools (Princeton, Harvard, Columbia, Yale, Dartmouth, Brown, and Cornell), but it is also home to some of the most...